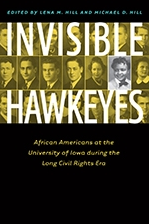 Invisible Hawkeyes: African American at the University of Iowa During the Long Civil Rights Era

Lena and Michael Hill’s new book, Invisible Hawkeyes, presents the stories of African Americans who attended the University of Iowa during the Civil Rights era.  In each chapter, they alternate how they tell the stories - one in an academic, scholarly approach and the other in the form of a personal testimony. The scholarly chapters focus on flushing out the history of the different fine arts and athletic communities, specifically the music department, visual arts department, theatre, the Writers’ Workshop, and athletics. The testimonial chapters serve as a tool for the reader to comprehend what the experience of being a student during that era was really like.

This balanced book provides an honest and informative history that been left behind as a distant memory. But with the structure of chapters presenting the larger context around these performance fields, and testimonies that are straightforward about personal experiences, the past becomes very present and impactful. In a way, the historical context creates the shape of the Black experience at the University of Iowa and the testimonies fill it with life.

Throughout the chapters and testimonies there are two major recurring themes: collaboration and self-determination. Lena and Michael Hill effectively capture the nuanced dynamic of collaboration within the community. Many of the Black students were able to find white mentors in their field who were willing to guide them and push them to grow. However, Invisible Hawkeyes exposes that these pairings were not so clean cut because even though the campus did not run rampant with racism there were still many instances where the white mentors, or the administration as a whole, did not completely support or encourage the Black students. Hence, the theme of self-determination emerges. The book sheds light on the hard work, dedication and passion that Black students had when pursuing their degrees. No matter what setbacks occurred due to an unwelcoming social environment, or not fully accepting faculty, these students focused on their craft and used their lessons and experiences to better themselves for the future.

Invisible Hawkeyes presents a holistic picture of the historical Black experience at the University of Iowa at a time where we, current Black students, are attempting to understand what it is our experience entails. Though times have changed and Black students are no longer flooding to Iowa in order to escape segregation, many of us still feel the pressures of a racist society trying to push us down, or at best, ignore us. Invisible Hawkeyes serves as a tool, a map, or a guide for how people in the past have dealt with being Black while living and learning in a predominately white university. We are able to use the book as an inspiration and foundation for hope, by understanding that there may not be high attendance for Black students, or even a completely welcoming environment, but there are people before us who have made it through and so can we. Invisible Hawkeyes does not only give much overdue honor to those who have shaped the way, but creates power for the future of Black students as we learn to follow in the footsteps of those who worked to create the path.